Home Wellness Learn how to treat depression with light therapy

Depression is a mental condition that can require intense treatment on a long-term basis. Although it is one of the most serious afflictions, not everyone who deals with it takes it seriously. You can treat depression with light therapy. 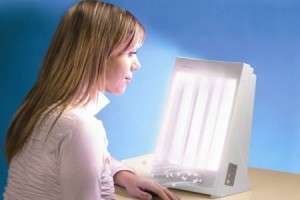 Light therapy, also known as phototherapy is one of the most popular forms of treatment that can help reduce depression and even treat it completely. It involves exposure to very bright light, as well as lasers, polychromatic polarised light, fluorescent light and more.

It is a well-known fact that people who live in dark places or countries with less sunlight have a predisposition to depression, which is why scientists have developed multiple therapy methods that can help in the long run.

Light therapy, previously known as heliotherapy is known for the impressive effects it has on depressed people. During a light therapy session, patients are exposed to powerful light sources.

As a person stands in front of a light box, for example, light strikes the part of the eye known as the “retina” and treats disorders such as the delayed sleep phase.

These sessions can last from 10 to 45 minutes, depending on the patient’s state. A patient who has never tried light therapy before will never be exposed to intense light for more than 15 minutes. On the other hand, people who attend these sessions often can increase the length of time spent in front of a lightbox.

Melatonin, a natural hormone that is present in the human body, is seriously affected when natural light’s presence is chaotic in one’s life. Light therapy sessions help increase melatonin levels by modifying its amount in the nervous system.

Light therapy is often referred to as an antidepressant, which is why most doctors recommend staying in the sun at least a few hours daily, to prevent depression and seasonal affective disorders.

How to treat depression with light therapy?

Few people know how important it is to stay in the sun and simply enjoy the feeling. The body, the brain and the spirit need the sun to feel and remain healthy. The lack of exposure to sunlight has serious effects on one’s body and mind in the long term. 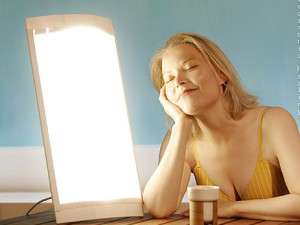 If you want to treat depression using light therapy, either major depression episodes or simply winter depression, you might want to see your doctor first. They usually recommend treatments that involve staying in front of a light box with a standard output between 2500 and 10 000 lux gauges.

There are a few side effects that everyone should take into consideration when trying out light therapy. Headache or sunburn is the most frequent side effect, but it can be avoided by reducing the time spent in front of the lightbox.

Light therapy is a non-invasive method that can contribute to an individual’s well-being. It is safe and convenient and light boxes are also available for home use, but a physician’s advice is recommended in all cases.

Most frequent questions and answers

How does light affect depression?

Lack of light often throws off your circadian rhythm. This can cause your brain to produce too much of the sleep hormone melatonin and to release less serotonin, the feel-good brain chemical that influences mood.

What is a SAD color for LED lights?

Although light therapy is at least as effective as antidepressant medications for treating the seasonal affective disorder, it doesn’t work or isn’t appropriate for everyone. Some people need more light or brighter light.

Can I use light therapy all day?

Contrary to popular belief, Lorem Ipsum is not simply random text. It has roots in a piece of classical Latin literature from 45 BC, making it over 2000 years old. Richard McClintock, a Latin professor at Hampden-Sydney College in Virginia, looked up one of the more obscure Latin words